Shine on! By Mary Kathryn Jablonski

If you follow our FB page, you will have already heard about the event called “The Creative Process-In Conversation” held at The Arts Center in Troy on June 11th, which did not disappoint. A panel of six creatives engaged in stimulating conversation with President Chris Marblo about the creative process and how it is manifested in everything from the arts to running an innovative business. I’ve captured a few of their top quotes on our Twitter page.

These fascinating creatives got the room charged with their energy, and for the sake of space, I’ll touch on only one person in the room, writer Marion Roach Smith, who spoke about the importance of surrounding yourself with a supportive circle of friends/colleagues who are invested in your success. She was clearly devoted to her creative life, telling of the discipline involved in writing, which for her included reading, observing, researching, listening, and being “out in the world.” She also mentioned “earning the Right to Write,” which prompted me to check out Julia Cameron’s book on the subject. In it, Julia says: 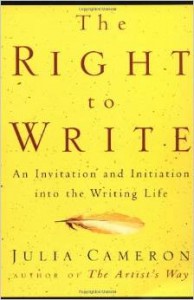 “We should write because it is human nature to write. Writing claims our world. It makes it directly and specifically our own. We should write because humans are spiritual beings and writing is a powerful form of prayer and meditation, connecting us both to our own insights and to a higher and deeper level of inner guidance.”

And, “I believe that what we want to write wants to be written.”

I continued the evening with a conversation over dinner in which another writer and I discussed the “aggression” of the word choices failure and rejection and even the word success, the weight of these words, and we wondered aloud how we personally and as a society assign these words to our creative work. What makes a project a failure? If a poem or a manuscript isn’t published, is it automatically a failure or is it a work-in-progress? Similarly, if a painting is hung in your living room and not at the MOMA, is it a failure? I know a writer who lists rejected, or unpublished manuscripts as works under consideration. Not that we need to coddle ourselves, but what a gentler approach! From rejection to success, it also helps to read the rejection letters that famous works of literature have received. Some laughable, some astonishing.

Hope all this talk about creativity gets your own creative juices flowing and more conversations underway. Here’s to the creative spirit in each of us. Shine on!    — MKJ

Find out when our upcoming eight-week program is scheduled.

Read what people are saying about us.

Make an appointment with any of our individual practitioners.